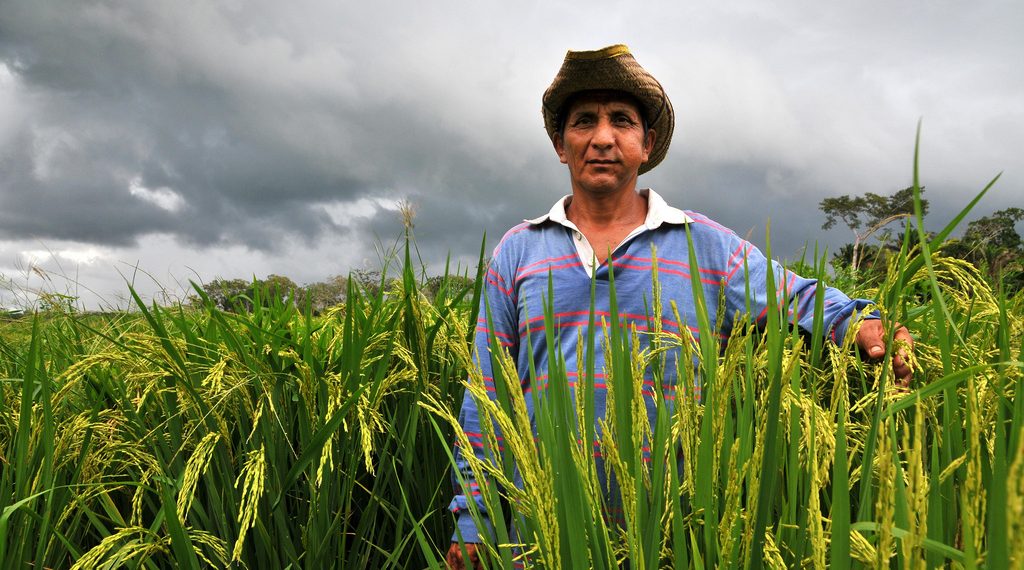 How can we go about tackling climate change while promoting a flourishing local economy and ensuring food security, all at the same time? The U.N.-led 2030 Agenda for Sustainable Development, launched in September 2015, would have you believe we need another 15 years to reach any kind of substantial progress on these issues. But there might be a way to speed things up, and it seems this Andean country has just cracked it.

The Government of Bolivia has just invested $40 million to support small and medium farmers in food production. Deputy Minister of Rural Development and Agriculture, Marisol Solano, stated that over 20 food security projects are already underway across the country, with financial support so far being given to breeding livestock and fish farming, as well as increasing the production of crops like potatoes, tomatoes, wheat, vegetables, coffee, and cocoa.

By enhancing local capacities, Bolivia aims to become entirely self-sufficient by 2020. With an increase of 25 percent in food production reported since 2014, and the aim being to sustain this growth rate for the coming year, it seems the country is not too far off from reaching its ambitious aim.

Reducing or halting imports would not only help improve livelihoods of local farmers and businesses, it would also cut down on emissions, while addressing overarching global issues like unemployment, hunger, and poverty.

Whether Bolivia will achieve complete food sovereignty in five years is uncertain. What is certain, however, is that if all our governments showed as much initiative as Bolivia to build on existing local capabilities, we would be having a very different conversation about world development issues right now (via UndergroundReporter).

Good but invest in small farmers means what! It gives different kind of meaning , by it means they assist to the farmers in their field crop maintenance assist is excellent other than that it drew the situation of totally disclosure of the small farmers living status.

They can grow anything thanks to climate zones on andes. Plus they gave the world the potatoe!

Until Monsanto comes around.. I hope not.

These countries are smarter than we are. They realize that our food is under attack.

Good idea even if you are still trading because this or that food doesn’t grow in your country. Though we have the technology I think to grow anything anywhere it’s just expensive.

This is a seriously viable future setter for byron shire. Tourism that comes to the area to witness food sovereignty instead of consumer party culture.

*Makes enquiries about property for sale in Bolivia. Books flight.*

Awesome . All they need next is to get rid of fossil fuels.

Awesome. We are so far behind.

I was in Bolivia in nov. of 2016. from the air as far as I could see were fires. they are burning their forests for farmland

Duh. We should all do this.

I had an opportunity to travel to Bolivia and interact with the people. They are all very hardworking, especially the ladies. After a long period of political instability, stability has set it now. There is this political will too to improve the overall condition of the state. They will surely come in to reckoning soon.

Great news Bolivia… it’s how it should be.

97% of US farms are family owned

That’s the way We Use to be!

and without water in 3 years

$40 million is not much to make the country completely food secure?

Yes well most poorer countries are self sufficient. They can’t afford to import foods

How come in Britain for decades the Biggest grants/subsidies went to the biggest agribusiness companies?

Most people there chew coca leaves, which suppresses hunger. Saves on food, because they are poor… Food independant you are, yes.

I think it’s ok to like this one. Not a lot of controversy…..?

Way to go. Why doesn’t UK follow the example

I think small scale farming is the only way to become food independent – certainly not by the huge mono-culture farms!

A war is brewing up in that corner… They’ll see… Idependence from the big banks, small size farming ogm free… Hmmm… They lost their democracy… The need to be liberated…

I hope this is true ?

Bolivia is doing great things. They are blessed with no oil !

Polly Blackburn but they have insane natural gas pockets they’d use for export in the southern department of Tarija.

Best wishes to Bolivia but as one of the world’s poorest countries and a population of 10 millions this seems to be a very minimalist scheme to achieve the stated aim of “food independent in 2020”. Anybody checked the figures?

Mike Dun I live there. It has been food independent for generations.

Mike Dun No doubt the Bolivian people don’t expect nor require the same quantity and vast range of foodstuffs that gluttonous Western populations expect and demand.

Socialism tries to develop solutions that meet the people not part of the entitled 1% ers.

Unlike America, this country cares about its people, just make sure your government is not bought by Bayer/Monsanto, Syngenta, Dow, Simplot, DuPont, or Scott’s.

Shaun-Robin Bukovnik interesting. They have actually been food independent for generations. Just wish they were independent in other areas. Socialism doesn’t work. It keeps them in poverty.

This website posts articles with the most half truths of any website I know. Most here just accept what they post without ever checking it out. Bolivia doesn’t care about its people any more than any other socialist country, which is to say they care about keeping the majority of people poor and oppressed. Their standard of living far below their potential. They have their 1%ers too – the corrupt government elite. With only 11 million people, it shouldn’t be too hard to feed themselves. Agribusiness feeds the world – you shouldn’t knock it.

Ken Greenland How foolish of you to lump all agribusiness as bad. Many grow organic. And contrary to popular belief GMO has not scientifically been shown to be harmful – plenty of anecdotal stories, speculation, and such. Often from the same crowd that thinks vaccines are harmful. You grow your own food?

Every country need to, especially by 2020

Believe me small farm less than 50- 100 acres is not sustainable. Here in Pakistan people have less than 12 acres and its hard to meet ends. Canot have tractor. Canot do plant rotation tube well becomes expensive.

Previous Post How To Increase The Number Of Earthworms In Your Garden Soil… Next Post Concerned About Mass Die-Offs, Morgan Freeman Converted His 124-Acre Ranch Into A Bee Sanctuary…

Back To Nature Living In A Beautiful Tiny House Tent…