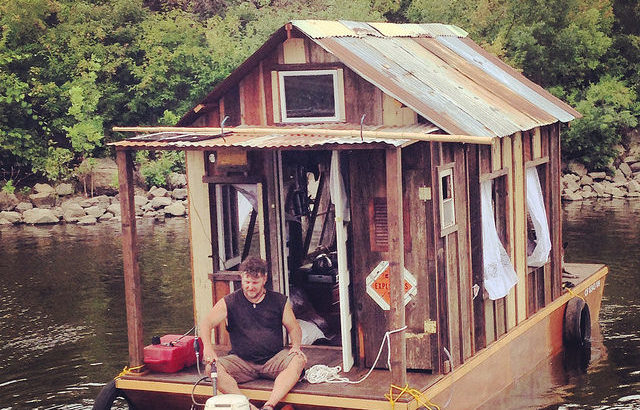 “I do not know much about gods; but I think that the river Is a strong brown god—sullen, untamed and intractable” – “Dry Salvages”, T.S. Eliot

Long before Wes Modes began planning a journey down the Mississippi, he started building a traditional barge-bottom houseboat in a California backyard out of rustic reclaimed materials (e.g. old fences and chicken coops). Once his shantyboat was complete he hatched a plan to transport it across the country from Santa Cruz to Minnesota to begin a “Huck-Finn style” journey down the iconic American river.

Following in the footsteps of Harlan and Anna Hubbard, whose eight-year journey down the Mississippi and Ohio rivers was chronicled in Harlan’s book “Shantytown”, Modes launched his own float 70 years later. His “Secret History of American River People” is part personal adventure and part research project, collecting stories of “river people” along the banks.

Complete with lofted bed, compost toilet and full-kitchen (propane-powered camp stove and plumbed sink), his 10-by-8-foot houseboat cabin serves as both floating home and mobile office for his summertime sojourns.

After two summers on the Mississippi recording stories for his “Secret History of American River People”, Modes (along with first mate Lauren Benz) set out to tackle the 652-mile Tennessee River from Knoxville to Paducah, Kentucky. We caught up with him in Knoxville, which he pointed out is also the setting for Cormac McCarthy’s semi-autobiographical shantyboat novel “Suttree”.

Nearly everywhere he goes, Modes has discovered that the times of shantyboat living have largely disappeared. “I just finished an interview with somebody,” he explained from Volunteer Landing in Knoxville.

“He was saying when he was a kid growing up in the sixties there were people living along the banks of some of the creeks and the river, but by the mid-to-late seventies those people were all gone. And by the eighties they had renewed the riverfront and by the nineties… all those people who used to live along the rivers in little homemade shacks and shanty boats were instead displaced.”

Modes uses crowdfunding to help pay for his trips where he hopes to tell the stories of people who don’t usually make the history books.

“I think that’s kind of like this idea of postmodern history in which you’re examining the little tales of people, the tales of you and I, the relationships in our lives, and the adventures we’d had and the hardships we’ve endured.