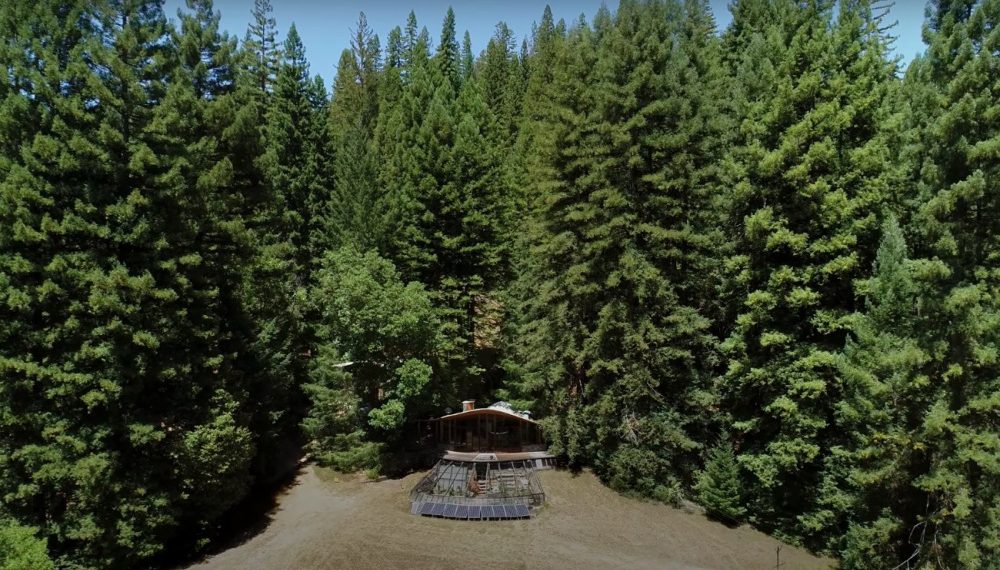 In 1968, Charles Bello and his wife, Vanna Rae, moved onto 240 acres of redwood forest looking to live a simpler life off the land. They had spent their savings to purchase the land so they got to work building their home themselves. Their first structure was a panelized A-frame that they erected in 5 days (with help from a couple family members). The total cost was $2,800.

After 15 years in the A-frame, they built a cabin in the woods, and there they lived for a decade until the trees began to block out their views. In 1991 Charles (who once apprenticed under famed architect Richard Neutra) designed the Parabolic Glass House. With a curvilinear wood roof and two curved walls of windows, the home feels enveloped in trees.

Charles and Vanna Rae built it for $8,500 with the timber they milled themselves, using salvaged materials for everything from doorknobs to stoves. The couple relied on photovoltaics, solar thermal and gas for power, and a dug-in greenhouse attached to the home provided much of their food. By canning and preserving, they could go for months without going to a grocery store. Their two boys were homeschooled. The couple supported themselves selling Christmas trees.

Nearly all the old-growth trees on the property were logged in the early 20th century, but Charles has spent the past half-century restoring the land. He and his wife set up the Redwood Forest Institute in 1997 to manage and preserve the forest. He has carefully selected 1,000 trees to be preserved for 2 millennia as the next generation of old-growth.

Now, 88 years old and a widower, Charles is determined to find successors; he hopes to find “three professional couples in their early 40’s, financially independent, who want to settle on the property continuing 52 years stewardship of this special place in a sustainable lifestyle where one does for himself or herself rather than urban living”. Check it out below…