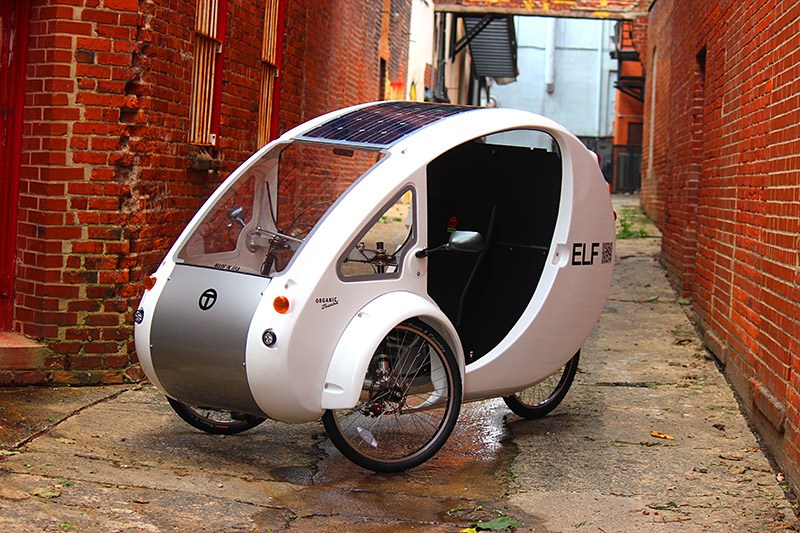 It looks like a micro-car. It rides like an electric-assist bike. The ELF (“electric, light, fun”) is a solar car-bike hybrid that will keep you out of the rain, or from breaking a sweat, and perhaps convince you to jettison your car for all those trips around town (and to get into shape while you’re at it).

Inspired by solar/human-powered aircraft pioneer Paul MacCready, decades ago Rob Cotter began experimenting with human-powered vehicles. He left a job at Porsche to consult though things slowed down in the nineties when ”people were more interested in minivans and SUVs and things.”

He decided the moment had arrived when, at the end of the nineties he began consulting for the New York City bike sharing, “and realized that if NYC’s putting in about 300 miles of new bike trails there’s a market for vehicles like this,” explains Cotter, “Bicycles that could get people up the hills easier, get them out of the weather, be safer, not tip over, carry passengers, carry a payload, have turn signals, brake lights, all of those things and just started going in that direction from that point on.”

In 2012 he founded Organic Transit – alongside his wife Maureen Costello- in an old furniture store in downtown Durham, North Carolina. To move things along quickly, they launched using an agile design process. “Originally we sold about 50 on kickstarter. We knew we were losing money on each one, but it allowed us to get the vehicles out there and make the changes. So since that time 3 years ago we’ve made about 400 changes to the ELF.”

Today, the ELF is a 160 pound (72.5kg) vehicle that can carry up to two adults (or an adult plus 2 children) or an adult plus 500+ lbs (226 kg) of cargo (there’s space in back for a dozen bags of groceries. Starting at $7,000, it’s classified as a ‘bicycle’ by US law so it can’t legally go faster than 20 mph on just electric power (though pedaling and hills will speed things up).

With a lithium-ion battery and mid-motor drive, it has a range of 48 miles per charge (and further if you pedal). The rooftop solar panel will recharge the battery with 7 to 8 hours of sun or the battery can be removed and plugged into a wall for a 2.5 hour charge.

Since it’s technically a bicycle, the ELF can be driven on bike paths and parked on sidewalks. “So our goal was to be able to take a car-like experience and turn it into a bicycle,” explains Cotter. “This will go anywhere a bicycle will go, all bicycles can ride on many streets, all secondary roads and things like that.

It’s like a car except that it’s 160 pounds so it’s a car that you can actually pedal. And the nice thing about it when you’re zooming along somewhere you can go point to point you can go door to door just pull right up to the building and park it in the bike rack up front.” Check it out below…

Nice… but WAY too pricey!

There are some folk who pay that for a non-electric push bike.

Yes…but there’s something to be said for pricing items so that the folks who really need them the most (like myself) can actually afford them!!

lol just the fools with more money than brains would pay $7,000

With the best respect, that is in no way a car…

*flashback to the hype of a certain Sinclair C5*

This problem has already been solved
http://media.gettyimages.com/photos/businesswoman-riding-bicycle-on-wet-city-street-during-rainy-season-picture-id540800381?s=170667a

Australian and world middle class people are so spoiled and petty-selfish. There is no future for us. I travel up to 800km on a power-assisted trike sometimes – I am 68 and fit for my age, and love every minute of it. An elf would be a luxury vehicle for me.

So as long as your 24 mil journey is marginally flat there and back your fine lol shit ?

Typo. “Farther if you peddle” not “further”

That is brilliant! I want one!!!

Great little machine – but illegal in idiot land – Australia. With extra batteries this Elf will travel much further. My solar assisted (legal) trike will travel up to 200km (using 3 x 20 a/h, 36V li-ions) on a sunny day with a 30kph speed to cruise on the freeway – gloat, gloat , gloat! But I’m wet when it rains …..

I couldn’t get to town and back!

Josh Graveline definitely not as cool as BBH, but still badass.

Optimistic – solar area is not that large. Most e-bikes have similar range and only take a short while to charge from mains. Design one of a couple that blends Velomobiles with e-assist.

Bryce Benlon do you think they make them in all wheel drive? ? ?