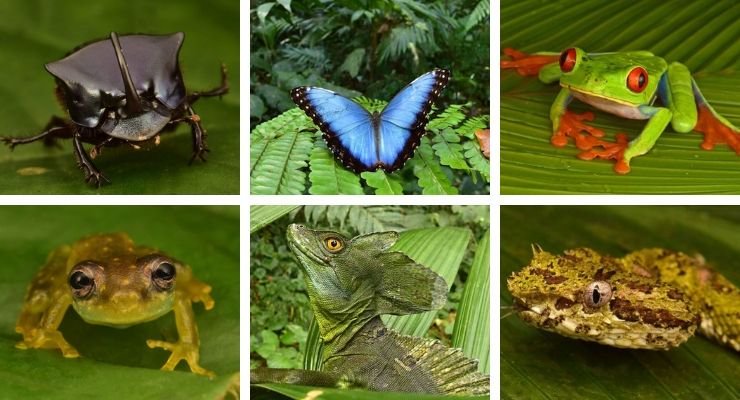 Scientists found 198 species of birds, 40 of small mammals, 56 amphibian and reptile species, 30 of large mammals, 94 butterfly species, and so much more…

A specialized team of conservation scientists has found what appears to be a hidden oasis deep in the rainforest of Honduras that’s teeming with dozens of rare and endangered creatures.

The remote settlement, known as the “Lost City of the Monkey God” or “White City” and located in the Mosquitia rainforest, is a stunning example of the biodiversity that was once common across the tropics and rainforests in the region. The rainforest is home to hundreds of species of bats, butterflies and reptiles, the Independent reports.

The “ecological SWAT team” from Conservation International’s Rapid Assessment Program (RAP) conducted their three-week expedition in 2017 after ancient ruins were discovered in the rainforest, which remains one of the least-explored areas of the region. Their full report on the expedition and its dizzying array of findings was only published this week.

The report details how the pristine ecosystem is filled with a number of rare and unique species, including those previously believed to be extinct.

This has included the False Tree Coral Snake, the pale-faced bat, and a tiger beetle which many had thought was already extinct. 22 species were also recorded whose presence in Honduras had previously been unknown, including the endangered Great Green Macaw and a livebearing fish that scientists have only now discovered.

In today’s world, it seems like a tale from the “Indiana Jones” movies. But a sensational archaeological find in an unexplored jungle was real as it was surprising to the explorers who ventured there. https://t.co/Io1TWB6D3r

In today’s world, it seems like a tale from the “Indiana Jones” movies. But a sensational archaeological find in an unexplored jungle was real as it was surprising to the explorers who ventured there.

In total, scientists documented 198 species of birds, 94 butterfly species, 40 of small mammals, 56 amphibian and reptile species, and 30 species of large mammals—including jaguars, ocelots and pumas—not to mention a huge variety of plants, fish, rodents and insects.

Trond Larsen, the director of RAP, expressed that his team was “shocked” by their major find. In a press release, Larsen noted:

“The ‘White City’ is one of the few areas remaining in Central America where ecological and evolutionary processes remain intact.”

The conservationist added that the diversity of the area’s wildlife makes it a very high priority for future conservation efforts. Larsen said:

“One of the main reasons we found such high species richness and abundance of threatened and wide-ranging species (e.g., peccaries) is that the forests around the White City remain pristine, unlike much of the region.

This makes the area a high conservation priority for maintaining the broader landscape connectivity that is essential for the long-term persistence of biodiversity through Central America.”

The White City has long been sought after by explorers searching for what is believed to be the home to an ancient civilization that inhabited the area during the pre-Columbian era.

The area, which is largely undeveloped, has faced threats from illegal economic activities such as deforestation due to cattle ranching, in spite of efforts by Honduras’ president in 2005 to extend official protection to the “lost city.”

“And these are areas with no road networks, no logistics or infrastructure to let people get in or let guards in, so it’s very hard to stop what’s happening.

In many cases, this illegal activity is being driven tangentially by drug trafficking, so it’s driven by powerful people with money. That’s the primary threat to the integrity of the forest of the area.”

Another member of the RAP SWAT team, John Polisar, noted the importance of ensuring strong protection that would allow the treasure-trove of rare creatures to thrive:

“We have been doing field work in the indigenous territories of La Moskitia for 14 years, and this site stood out as being simply gorgeous.

Because of its presently intact forests and fauna the area is of exceptionally high conservation value. It merits energetic and vigilant protection so its beauty and wildlife persist into the future.”

Shame this was “found”.
Now watch humanity destroy it.

Previous Post Energy Hunger, Guzzlers & Providers, Technologies That Could Meet Our Growing Thirst For Electricity… Next Post Edible Mushroom Discovered That Eats Plastic & It Could Help Clean Our Landfills…