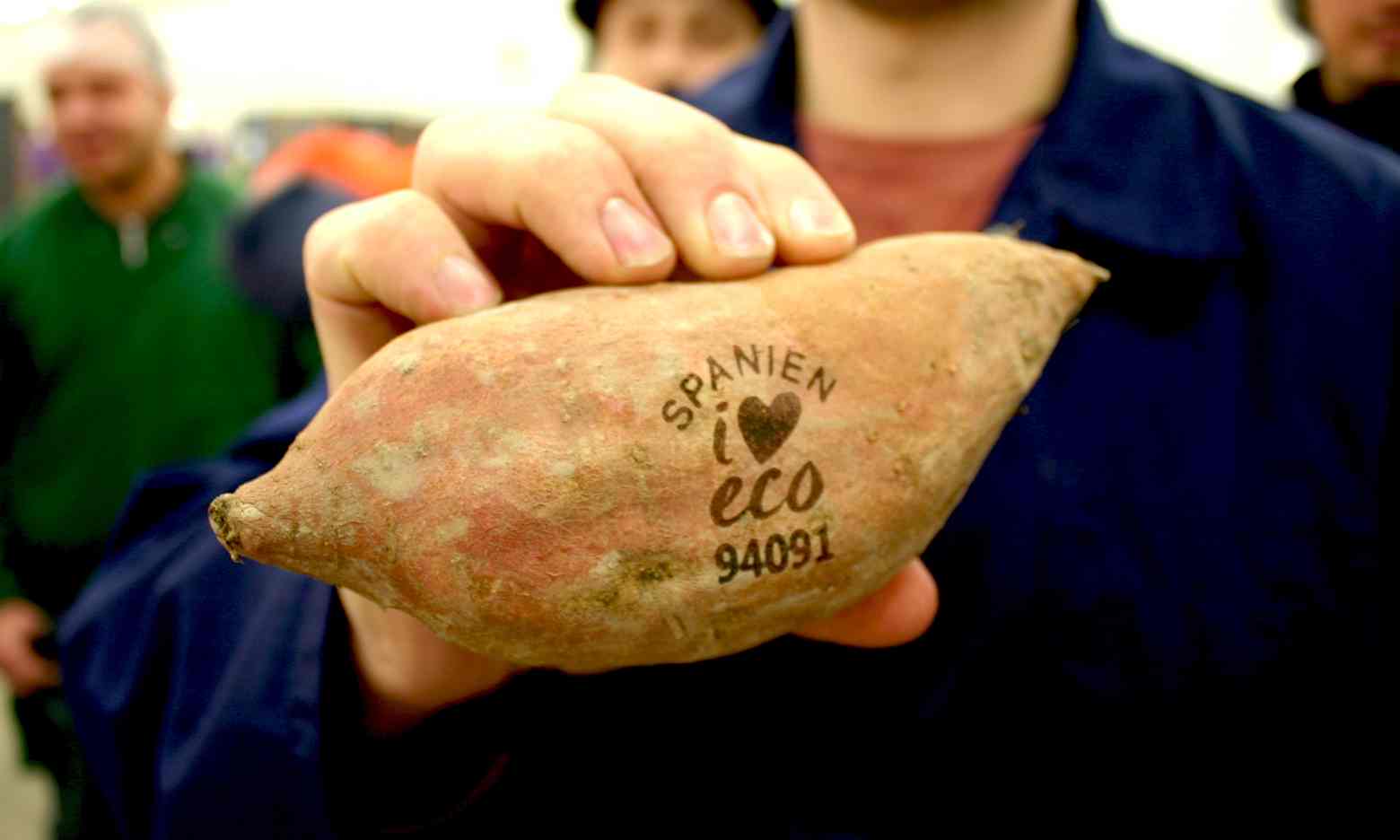 The humble fruit sticker may seem an unlikely cause for environmental concern but removing it from produce could create huge savings in plastic, energy and CO2 emissions.

In response to consumer demand for less packaging, Dutch fruit and veg supplier Nature & More and Swedish supermarket ICA have joined forces to run a trial to replace sticky labels on organic avocados and sweet potatoes with a laser mark. M&S are also using it on coconuts in the UK.

Dubbed “natural branding”, the technique uses a strong light to remove pigment from the skin of produce. The mark is invisible once skin is removed and doesn’t affect shelf life or eating quality.

“By using natural branding on all the organic avocados we would sell in one year we will save 200km (135 miles) of plastic 30cm wide. It’s small but I think it adds up,” says Peter Hagg, ICA business unit manager.

The laser technology also creates less than 1% of the carbon emissions needed to produce a sticker of similar size.

Stephane Merit, business development manager of the Spanish company behind the technology, Laser Food, says with millions of stickers used on food produce around the world everyday, the technology could make a “significant reduction in the amount of paper, ink, glue” being used as well as the cutting the energy used to produce and transport them…

The sustainability saving is particularly important for organic shoppers, who now account for almost a fifth of all ICA’s fruit and veg sales, says Hagg. “Organic sales are driven by environmental awareness, like climate change and belief in health benefits. Younger shoppers also choose products depending on the environmental impact of the packaging. And we know that this will be very important in coming years,” he says.

Switching from plastic to cardboard is a bonus, but selling organic produce as loose is even better says Hagg. Yet under EU rules all items need to be marked hence the need for stickers if selling loose.

“This is a solution that permanently marks the skin of the product, so it’s better from a sustainability perspective, but also avoids the problem of stickers falling off.”

Laser Food’s technology has been around for several years but has previously been used for marketing or branding, without being explicitly linked to sustainability.

“Up to now, no one has used this technique with the specific aim of cutting packaging. It was used for novelty – which is nice, but a gimmick at Easter or Christmas isn’t going to pay off,” says Michaël Wilde, sustainability and communications manager at Nature & More. “What we are saying is, by buying this product you’re saving plastic.”

The cost of a laser machine is considerable, but after that initial investment, Wilde says it is almost more cost-effective than stickers. “You have to invest in an extremely expensive machine, so it’s very much an investment for the future. This is something we believe more and more supermarkets will take on. It saves resources, CO2 and energy, so it does calculate.”

While the ICA trial has begun with sweet potatoes and avocados, products where sticking labels to skin is challenging, the supermarket is already preparing to expand onto other products.

“The next step will be to use natural branding on edible skin products, such as apples or nectarines,” says Hagg. “If consumers react positively there is no limit. We are planning to try it with melons in summer, as there is a problem there at the moment with stickers attaching to the skin.”

Although ICA’s involvement is the largest retail trial to date, the technology has been used in various other European markets.

Last year UK supermarket M&S trialled it on oranges, saving several tonnes of packaging according to fruit technologist Andrew Mellonie, who supervised the project. However, citrus skin’s ability to “heal” itself meant the laser mark wasn’t as effective so the trial was suspended, but the retailer now uses it on coconuts and has plans to extend to other products.

The reaction of shoppers to laser-branded produce is one of the only concerns for Hagg and Wilde, but, they say, so far feedback on Swedish social media has been positive.

For Hagg, no matter how small the story, nowadays sustainability is “always good news” for consumers and he is hopeful that other supermarkets will follow ICA’s example.

“The calculations are that it costs the same, but sustainability for our consumers and ourselves is the biggest gain. I hope it will take off with more products and also non-organic. I can only imagine what a bigger retailer would be able to save. I really hope it spreads.” (via Minds)

This also eliminates the residue many of the sticky labels leave on food. The adhesive can also soak into the food itself, and many people are allergic to it.

I hate those stickers this is great.

why does it even have to be individually labeled?

Amazing how seemingly little things really add up to make a difference.

Good the chickens can eat the others and also they don’t breakdown in compost…a great move .

That’s better for the compost and the chickens

Very cool but this has been around for about 10 years

The “Worm Lady” Mary Applehof would love this. RIP Mary those inedible stickers are on the way out fine lady.

What harm does laser labeling do to our food?

Nothing that can’t be removed with a vegetable peeler and put in the compost. It’s only a surface burn.

My vote for a Nobel Prize!
Now onto loose postcards in magazines!

Lazer printing is very dull. In order for the label to be seen the fruits and vegetables must be sprayed with a chemical first. Either iron oxide or iron dioxide. So you have to spray it with rust. Not sure how that’s good for you. Lock-jaw anyone.

A step in the right direction

Laser machines take power to build and to operate
Seems to me a great idea but just shifting the problem to a different area
Bit like paper to plastic and now back to paper!

Not necessarily, it depends on the relative resource & energy use.

Wishingful thinking that..other countries would do this politics etc aside.

Why have anything on each individual piece of fruit or veg. It is crazy.

I live in Sweden and have never seen this.

Probably because those laser machines cost a gazilion Krona and none but the wealthiest producers could afford them.?

In principle yes, but do you need to stamp every single vegetable?

I really don’t know why individual sweet potatoes need to be labelled. In South Africa they are displayed and you take what you want and have them weighed. If items are imported, the shelf label tells you. Simple, easy, cheap.

What, oh what, did we ever do before every piece of produce had to be labelled? It’s just one more unnecessary piece of packaging that wastes all kinds of resources in order to make someone a buck.