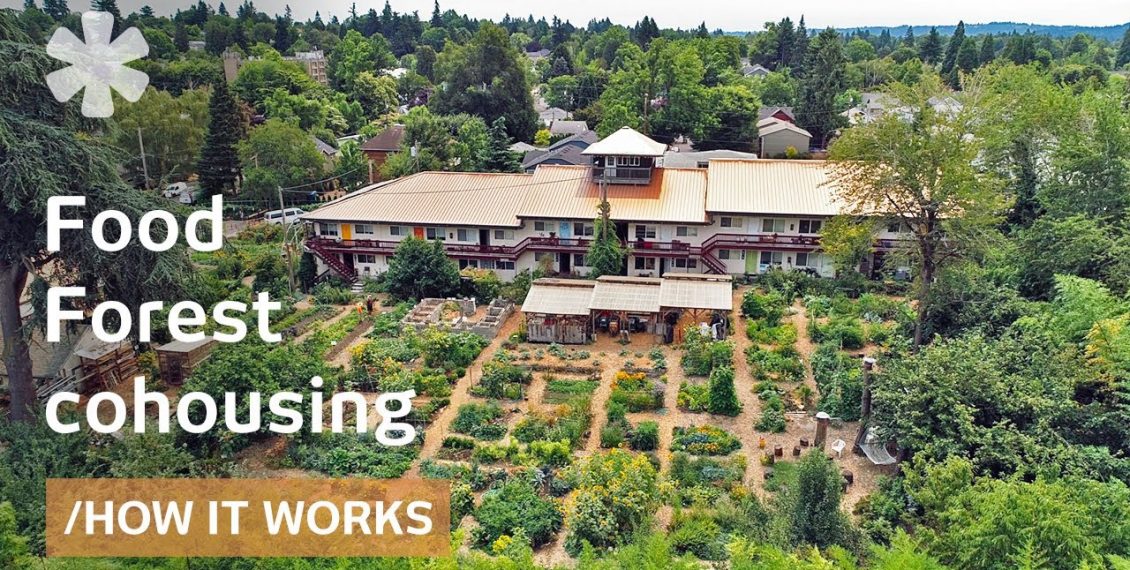 In 2007, Ole and Maitri Ersson bought the rundown Cabana apartment complex in the city and immediately began to de-pave parking spaces to make space for what today is a huge permaculture coliving space and urban food forest.

Today, the Kailash Ecovillage has 55 residents who all help farm where there was once pavement, grass, a swimming pool, and an overgrown weed patch.

The community is well-prepared for systems collapse; they have extensive rainwater collection and storage, plenty of produce and they process their own sewage. Their permitted sanitation project complies with international building codes for compost toilet and urine diversion systems and turns their pee and poop into nitrogen and compost.

Here, nearly everything is shared. There are two community electric cars – donated by the Erssons who no longer have a private car-, shared bicycles (and bike trailers), an extensive fruit orchard, berry and grape patches, and a considerable community garden space. Photovoltaics provide about two-thirds of the energy consumed by the complex.

Neil Robinson is the community’s full-time farmer who has sold thousands of dollars of Kailash produce at farmers’ markets. He moved in as a way to prepare for systemic collapse. “I wanted to learn to grow food and then have a system that could step in. We have water, we have food.”

Ole explains, “We’re in this zone where it’s not a question of if, but when, we’re going to get a Richter 9 earthquake… that’s going to break all kinds of grids, the power grid is likely going to go down, the sewer grid almost undoubtedly and it’s probably going to take months, if not years, to get the sewer system going again.” Their sanitation project can absorb 60 adults for months.

Rents here are lower than the Portland average because the Erssons want Kailash to be accessible to all income levels. There’s a 300-person waitlist, but Ole hopes others will follow their example.

“If you look at it from an economic perspective no business would want a complex landscape like this because it’s way too much maintenance, but what you have to do is turn the maintenance over to the residents, and then they do it: they get joy; it’s an antidepressant; it’s a way of creating food; it’s a way of creating community; so you have to do it in a certain way, but it’s definitely a lot more work than the typical grass and shrub landscape for sure.”

Check it out below…