Bees Prove They Are Highly Intelligent To Amazed Scientists… 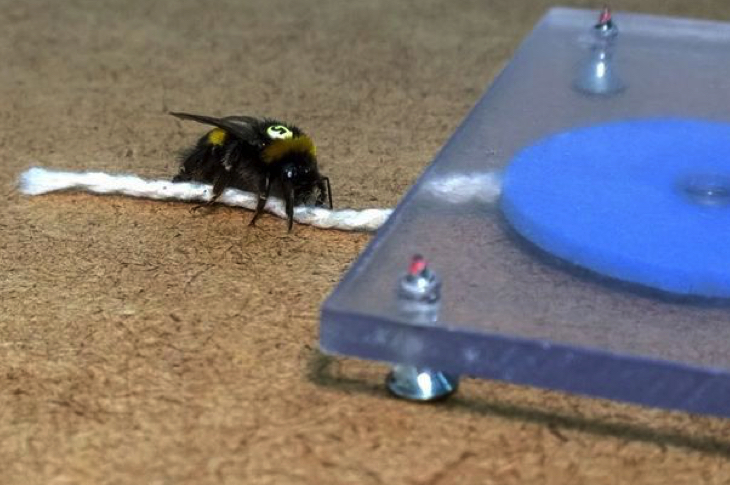 Bee videos ave been making waves on social media as people begin to realize that the tiny insects are actually much more intelligent than anyone has ever given them credit for. Researchers at the Queen Mary University of London conducted experiments with bumblebees to test their intelligence and the little critters did not disappoint.

The experiments are usually used on apes and birds, but the bees’ quick learning showed for the first time that an invertebrate is capable of reacting in the same way in order to accomplish what they want.

“We wanted to explore the cognitive limits of bumblebees by testing whether they could use a non-natural object in a task likely never encountered before by any individual in the evolutionary history of bees,” said Dr. Clint Perry, joint lead author and also from QMUL’s School of Biological and Chemical Sciences.

In one experiment, scientists trained 23 out of 40 participating bees to use their legs and feet to pull a string to reach their food. The food was placed atop a small disc which was inaccessible because it was underneath a plastic covering. However, if the bees pulled the strings that were attached to the discs, they were able to pull the food out and eat it.

The training part of the experiment was crucial, researchers found, as only 2 out of 110 bees from a separate group that was not shown how to pull the strings were able to figure it out. Researchers allowed yet another group of bees observe the already-trained bees perform the task and 60 percent of them were able to learn it as well… 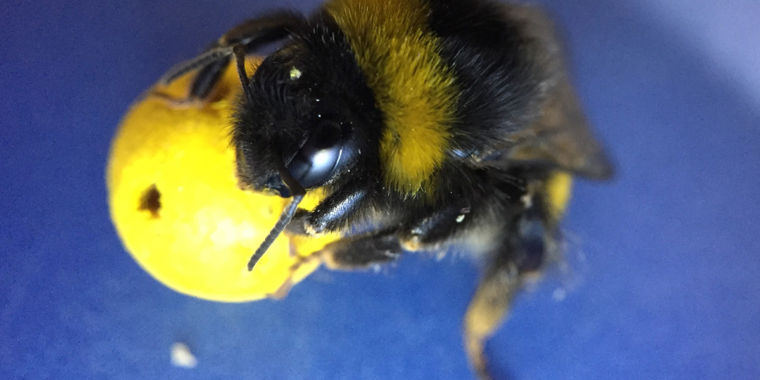 What’s even more fascinating is that the bees are able to pass this knowledge on to future generations. The researchers put the trained bees into colonies and the skills were spread successfully throughout the colony’s worker bees.

“Cultural transmission does not require the high cognitive sophistication specific to humans, nor is it a distinctive feature of humans,” said Perry.

In another experiment, the scientists essentially taught the bees how to play soccer by training them to move a ball to a certain location and then receiving food as a reward. The first group was first taught where the correct location was and then shown how to move the ball from elsewhere onto the location. Other bees learned under different conditions, such as with a “ghost” demonstration that didn’t involve a live or model bee showing them how to do it, but these attempts proved unsuccessful.

Joint lead author Dr. Olli J. Loukola, said: “The bees solved the task in a different way than what was demonstrated, suggesting that observer bees did not simply copy what they saw, but improved on it. This shows an impressive amount of cognitive flexibility, especially for an insect.”

With the population of bees dwindling rapidly, it’s important to make sure bees stay in the news, even if it is for something unrelated to their decline. Bees are extremely important for food production, wild habitats, and the environment and humans as a whole, and recognizing them for their great achievements and intelligence is crucial (via TrueActivist).

Smarter than some ppl for sure…

Duh!! Of course they are highly intelligent! Why are people only just waking up to the fact that animals and bees are intelligent??! It’s not rocket science! I thing humans are so blinded by their superiority and inability to see other creatures tah they have a false sense of their importance!

Of course bees are highly intelligent. Human beings are one of the dumbest animals on the planet.

I’m sorry but is that bee wearing a Batman outfit?

Grammar in the headline, awkward it is.

I wonder what the bee thinks of how far the scientist has come? ?

Previous Post Revolutionary 3-D Printer Can Build 10 Houses In 24 Hours, And For Only $5,000 Each… Next Post How A Sustainable Aquaponics Farm Grows 7000 Heads Of Lettuce A Week…