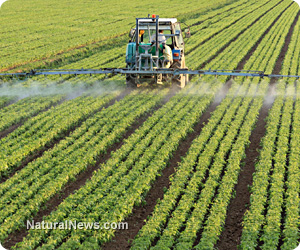 “The U.S. Environmental Protection Agency (EPA), which these days would more aptly be titled the Chemical Protection Agency, has passed a new regulation change that will massively increase the maximum allowable levels of herbicide residue in food.

According to the new regulation, the EPA has doubled the amount of glyphosate (Roundup) residue legally allowed on oilseed crops like canola and soy that are intended for human consumption, even though this will create a significant public health hazard.

Genetically-modified (GM) crop technology is an ever-evolving process that, contrary to industry claims, requires increasingly more and varying types of pesticides in order to generate yields. But the previous legal framework prohibited the excessive use of such crop chemicals as they are a clear threat to human health.

So to accommodate the biotechnology industry, the EPA has simply rewritten its own rules so that more of the chemical can legally be applied to GM crops without consequence…

Building A Rock Pizza Oven At The Off Grid Cabin…

Please read this. Big money is buying the EPA off. Be in the know.

Of course. Not just farms. All the pesticide used in private lawns eventually leak to the ground drinking water sources.

Of course, gotta speed up population control to meet the NWO deadline.

do you think they give a crap about us?

EPA which these days would more aptly be titled the Chemical Protection Agency, has passed a new regulation change that will massively increase the maximum allowable levels of herbicide residue in food.

EPA which these days would more aptly be titled the Chemical Protection Agency, has passed a new regulation change that will massively increase the maximum allowable levels of herbicide residue in food.